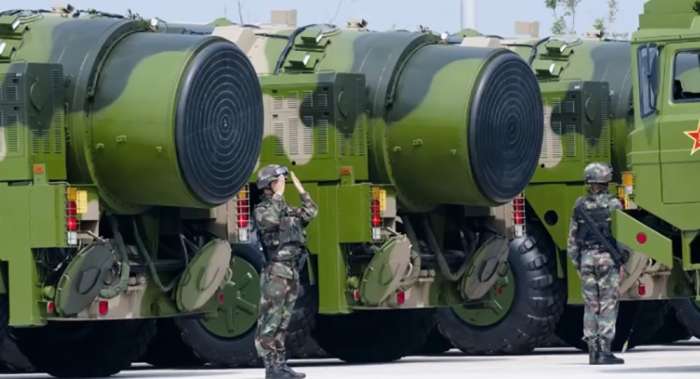 China’s strategic and tactical missile forces have practiced firing intercontinental ballistic missiles from a post deep underground, Chinese media reported. China’s People’s Liberation Army Rocket Force simulated an ICBM strike against an “imaginary enemy,” the Global Times reported Wednesday, underscoring that details such as the location of the exercise or when it was carried out remain undisclosed. “Long-term survival training in closed environments” has become a new normal for troops in the Rocket Force, the report notes.

In 2011, students at Georgetown University claimed to have mapped out a 3,000-mile network of tunnels in northern China where the Rocket Force’s missiles and nuclear warheads are kept — though China’s state-run CCTV broke the news of the hardened tunnel network in March 2008, according to James R. Holmes, associate professor of strategy at the US Naval War College.

China’s “underground Great Wall,” as pundits have called it, is crucial for its nuclear deterrence strategy.

Chinese military doctrine places a strong emphasis on only using nuclear weapons in retaliation against a first strike on China. While China does not plan to use nuclear weapons unless it is attacked with them first, analysts told Global Times, the PLA Rocket Forces still want to be prepared for a potential doomsday.

Storing and training to fire missiles from underground safeguards Beijing’s ability to conduct a counterattack, and it is that ability that will deter would-be adversaries from attacking, wrote Hui Zhang, senior research associate at the Project on Managing the Atom at Harvard University’s John F. Kennedy School of Government.

The PLA Rocket Force, previously known as the Second Artillery, “conducts war planning and training under the assumption that China will absorb a first nuclear blow and use its forces only to retaliate,” Hui said in his 2012 paper.

That China has even revealed the existence of the underground Great Wall “shows Beijing wants potential adversaries to know it has a real and reliable retaliatory counterattack capability and thus discourage thoughts of first strike,” Hui wrote in a separate 2012 post, adding that “from a Chinese perspective” the underground Great Wall “consolidates the mutual deterrence between China and the US, and thereby enhances strategic stability.”

For his part, in his report for The Diplomat, Holmes argued “the very scale of the underground network opens up new vistas for Chinese nuclear strategy” beyond just minimal deterrence. – Sputnik News Photo: Youtube/ Military Technology Zone