(Use of these is taught as one small part of the Radilogical Defence Officer course.)

The BRL RADIAC Calculator No. 1 was produced by Blundell Rules Limited of Luton England. Since it is based on the Radiation Dosage Calculator designed by William Orr in 1951, and since the company moved to Weymouth in 1956, it is safe to say that it probably dates from 1952-1956. It works as follows: if the exposure rate (roentgens/hr) is known at a given time after a nuclear explosion, the calculator predicts the exposure rate at any other time. It also estimates the dose to personnel who are in the area at specified periods of time after the explosion. 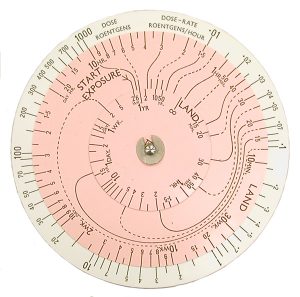 A somewhat unique feature of this slide rule is the fact that the central two circles have two sides: a blue side for calculations involving contamination generated at sea, and a pink side for contamination generated by detonations over land. The idea, I suppose, is that the effective half-lives of the fallout would be different in the two situations because the radionuclide makeup of the fallout would be different. To change sides, the metal clip in the center is removed and the circles are flipped over. 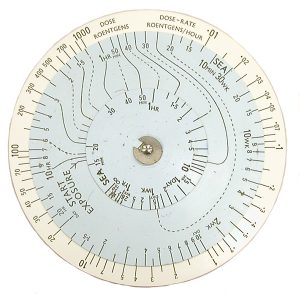 The RADIAC Calculator No. 2 was produced by Blundell Rules Limited of Weymouth England. Since the company moved to Weymouth in 1956, and changed their name in 1964, it probably dates from about 1960. The two inner disks are one sided. No distinction is made between land and sea bursts. 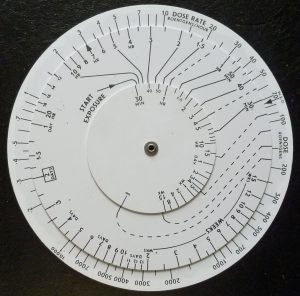 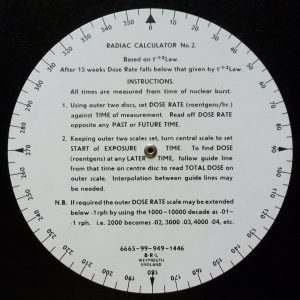 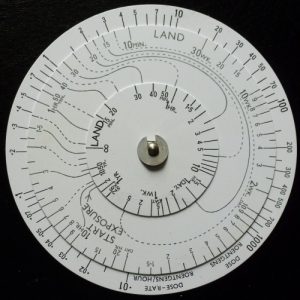 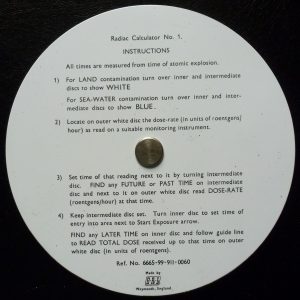 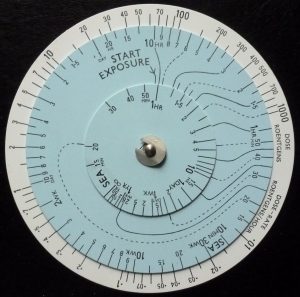