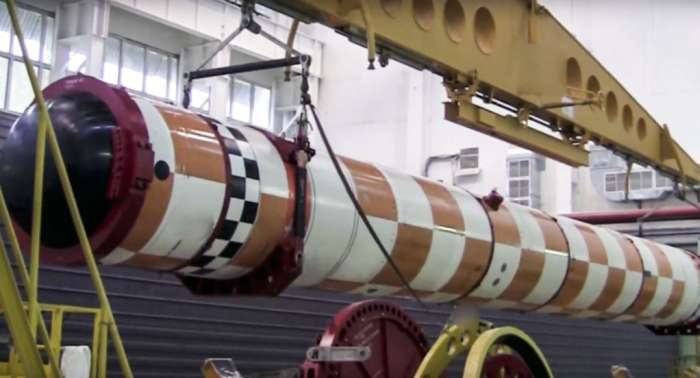 Radio Free Europe – Russia has launched a new, special-purpose, nuclear-powered submarine that is believed to be capable of carrying a new nuclear-capable underwater drone. The submarine Belgorod was launched on April 23 in the northwestern city of Severodvinsk. Russian President Vladimir Putin watched the proceedings via video link from the Severnaya Shipyard in St. Petersburg. Construction on the vessel started in 1992 but was delayed several times due to financing issues.

Journalists were not allowed to photograph or film the launch as the submarine’s operational characteristics have been classified.

In November 2015, a state television channel briefly showed a document with drawings and details of a planned, nuclear-capable, submarine-launched drone. The document said the purpose of the drone was to “strike important enemy economic facilities in coastal areas” and create “zones of extensive radioactive contamination that are unfit for military, economic, or other activity for a long period of time.

The Kremlin quickly dismissed the report as a mistake.

However, in his annual state-of-the-nation address on March 1, 2018, Putin discussed a number of new weapons undergoing testing and development, including a nuclear-capable undersea drone.

Using colorful graphics and video, Putin said the high-speed drone could target both aircraft carriers and coastal facilities with nuclear weapons. Putin claimed the drone would be impossible to intercept.

The drone was later named Poseidon.

In his most recent state-of-the-nation address on February 20, Putin announced that the first submarine equipped to carry the Poseidon would be floated out before summer.