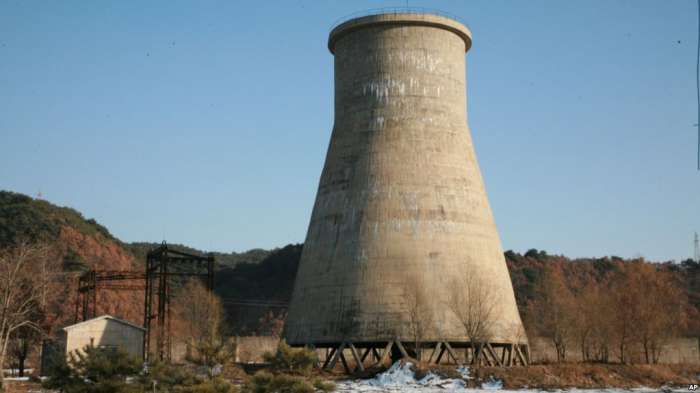 North Korea’s offer to dismantle its Yongbyon nuclear facility should not persuade the United States to lift sanctions, nuclear experts say. Even without the showcase installation, the country can produce two to three nuclear weapons a year in other facilities, they say. After President Donald Trump met with North Korean leader Kim Jong Un at their summit in Hanoi last month, Trump said at a press conference that he walked away from making a deal on denuclearization because Kim asked the U.S. to lift all sanctions imposed on the country in exchange for dismantling the Yongbyon nuclear facility.

David Albright, president of the Institute for Science and International Security and a former U.N. nuclear weapons inspector, said Trump probably walked away because the U.S. government knows that North Korea can produce nuclear weapons elsewhere.

“One could argue that Yongbyon produces enough plutonium and could be making weapons-grade uranium … for two, three nuclear weapons a year,” Albright said. “They can have enough enrichment facilities outside Yongbyon to make that same number a year.”

The Yongbyon nuclear facility is considered North Korea’s only plutonium facility with a capacity to enrich uranium. Reprocessing plutonium and enriching uranium are the two pathways of nuclear weapons development.

North Korea offered to dismantle the Yongbyon facility twice before.

Pyongyang announced its willingness to dismantle the facility and shut the main reactor in Yongbyon in the early 1990s under an agreement reached with the U.S., but restarted it in 2003 when the deal broke down.

Under a 2007 deal, North Korea said it was willing to dismantle Yongbyon and shut down the reactor, only to reopen it again when that deal fell apart.

Lewis said he and colleagues at the Middlebury Institute’s James Martin Center for Nonproliferation Studies identified one of those plants.

The facility is known as the Kangson enrichment site by the U.S. intelligence community.

Olli Heinonen, former deputy director general of the International Atomic Energy Agency (IAEA), has inspected Yongbyon in the past. He said North Korea could easily hide its uranium enrichment facilities because North Korea uses centrifuge technology to enrich uranium, which allows it to disguise them.

Particularly when you have selected technology North Korea has, which is gas centrifuge enrichment technology, it doesn’t use electricity very much,” Heinonen said. “It looks like any other industrial workshop, or even a supermarket.”

Heinonen stressed North Korea has “very extensive uranium resources” in the country at its disposal that can be extracted and enriched in other facilities.

Lewis said for a shutdown of North Korea’s nuclear facilities to be irreversible, North Korea would need to dismantle them, and “sensitive equipment would need to be destroyed or removed from North Korea, not merely stored.”

Experts stressed the denuclearization of North Korea cannot be achieved all at once, or only with the dismantlement of Yongbyon, and said the country needs to declare the list of its nuclear arsenal and allow nuclear inspectors into the country to inspect and verify its dismantlement.

Christy Lee contributed to this report, which originated on the VOA Korean. – VOA News