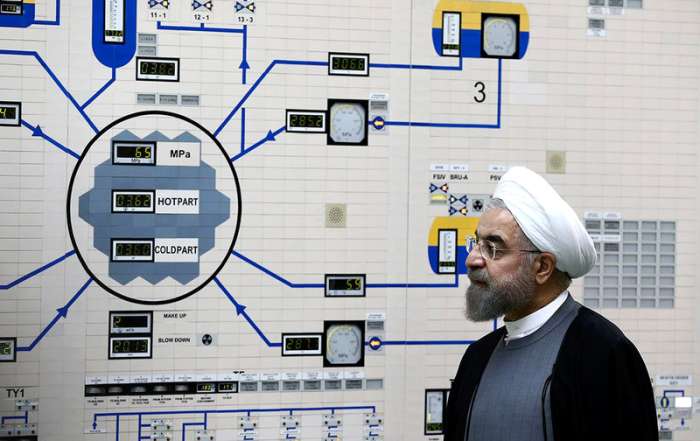 In a report earlier this week, the Israeli Military Intelligence Directorate said that Iran would be capable of producing a nuclear weapon if it were to resume its nuclear program in violation of the 2015 Joint Comprehensive Plan of Action (JCPOA). However, it also found that Iran hasn’t violated the JCPOA, as Washington has claimed. The Israeli military intelligence report released on Wednesday focused heavily on Iran, Israel’s major rival in the region. While noting that the Islamic Republic’s nuclear program had sufficiently developed by the time of the 2015 JCPOA,

also known as the Iran Nuclear Deal, to be able to construct a nuclear weapon in only two years’ time, the report also found that Iran hadn’t violated that deal, as the US claimed last year.

The US has echoed but also diverged from Tel Aviv’s rhetoric regarding Iran and its nuclear as well as ballistic missile programs. In 2015, the Obama administration essentially took Tehran at its word that its ballistic missiles were not intended for use in deploying nuclear weapons and permitted the country to retain its missile stocks, and the JCPOA limited its production of nuclear material to a purity level necessary for power plants.

When US President Donald Trump took the US out of the JCPOA last May, he claimed Iran had violated the deal by enriching more uranium-235 than was permitted and constructing more refinement centrifuges than allowed. While Israeli Prime Minister Benjamin Netanyahu corroborated those claims in rather dramatic fashion, their position directly contradicted findings by the International Atomic Energy Association, which said at the time that Iran had not violated the terms of the JCPOA.

The remaining signatories of the agreement — the UK, France, Germany, Russia, China and the European Union — have adhered to the JCPOA, as none of them agree with Washington that Tehran has violated it. However, US sanctions have forced European institutions, such as the international bank wire security service SWIFT, to comply with Washington’s wishes and cease business with Iran, Sputnik has reported.

As the Washington Post noted last May, by possessing what Netanyahu called a “nuclear archive” of documents from its 1999 to 2003 nuclear weapons program, Iran was violating the spirit of the 1970 Non-Proliferation Treaty (NPT), but not the terms of the JCPOA.

​”Iran continues to seek nuclear weapons to intimidate peaceful people all around the globe and ballistic missiles to use as delivery systems,” Bolton said in a statement via White House media.

The Trump administration further justified its JCPOA withdrawal, and the reimposition of sanctions on Tehran in August and November of 2018, under the guise of seeking a new and better treaty. Trump specifically faulted the JCPOA for its various sunset provisions, which would gradually give Iran the ability to legally pursue a bomb again if its so chose, assuming no new agreement was made.

Israeli intelligence, however, warned Wednesday that Trump’s move may be having the opposite effect of what he intended: the increased economic and political pressure may be forcing Tehran into a corner where it feels that possession of nuclear weapons and delivery systems is its only way to negotiate fairly with the world community, similar to the strategy pursued by the Democratic People’s Republic of Korea (DPRK), the Jerusalem Post reported.

On Wednesday, Netanyahu met with diplomats from 60 countries in Warsaw, Poland, for a conference organized by the US on international policy toward Iran. European JCPOA signatories, however, sent only junior diplomats to the affair as a rejection of US-dominated policy on the subject, the Guardian reported. At that meeting, US Vice President Mike Pence scolded European powers for continuing to work with Iran to circumvent US sanctions, calling it an “ill-advised step.”

To that end, Iran’s Supreme Leader, Ayatollah Ali Khamenei, warned Europe to distance itself from the US in remarks on his website Wednesday.

Trump’s attorney and the former mayor of New York, Rudy Giuliani, meanwhile spoke before a Warsaw rally of the National Council of Resistance of Iran (NCRI), a Paris-based opposition group that serves as an umbrella organization for The People’s Mojahedin Organization of Iran (MEK), a terrorist organization that opposes the Shiite clerical rule brought to power in Iran by the 1979 revolution. The 40th anniversary of that revolution, which overthrew a brutal monarchy that had been returned to power by force by the US and UK in 1953, was celebrated this week in Iran.

​The US has touted the MEK as a democratic alternative for Iran, but it only removed the group from its list of terrorist organizations in 2012, and the group is known to be responsible for numerous terrorist attacks in Iran, especially during the decade-long war with Iraq, Sputnik reported.
In this Dec. 13, 1951 file photo, crowds of supporters of Prime Minister Mossadegh gather around a huge portrait of Iranian Mullah Kashani, one of the powerful backers of Mossadegh’s regime, in Tehran. Once expunged from its official history, documents outlining the U.S.-backed 1953 coup in Iran have been quietly published in June 2017, by the State Department, offering a new glimpse at an operation that ultimately pushed the country toward its 1979 Islamic Revolution and hostility with the West.

The MEK is “very close to the Israeli regime,” Mohammad Marandi, an expert on American studies and postcolonial literature who teaches at the University of Tehran, told Sputnik last September. He noted that the group supplied Israeli intelligence with what he called a “fake laptop” in 2005, purported to have belonged to an Iranian nuclear scientist, which the US then used as a key piece of evidence to argue that Tehran had a covert nuclear weapons program. The information on the computer was later shown to be fraudulent, Marandi noted.

“Everyone knows that Iran is the No. 1 sponsor of terrorism in the world. There isn’t a single government there that disagrees with that,” Giuliani said at the NCRI rally. “The reality is, Iran should be isolated until Iran changes. If they can do what our government, American government, other governments, believe and make policy change within, I would be satisfied with that, although skeptical. If it results in regime change, I think that would be a cleaner solution.”

However, author and journalist Daniel Lazare told Sputnik Thursday that Netanyahu’s real goal in Warsaw is that he “wants the Saudis and US to fix a problem that it [Israel] caused itself.”
Iranian armed forces members and civilians take shelter in a shooting during a military parade marking the 38th anniversary of Iraq’s 1980 invasion of Iran

“Israel is now in its worst strategic position since the eve of the Six-Day War in 1967,” Lazare said. “This is largely due to its own miscalculations. Israel backed — or at least did not oppose — the 2003 invasion of Iraq even though it played into Iranian hands by installing a pro-Shiite government in Baghdad. It backed regime change in Damascus, which backfired royally when growing ISIS [Daesh] and al-Qaeda influence among the rebels caused a stampede of support for the Assad government. The upshot of both is Iranian sway now extends all the way across Iraq and Syria to the Mediterranean, the first time this has happened since literally the seventh century.”

“For Israel, it’s a strategic setback of the first order. This is why Netanyahu said in Warsaw that he’s seeking ‘an open meeting with representatives of leading Arab countries, that are sitting down together with Israel in order to advance the common interest of war with Iran,'” Lazare said. “I think that Trump is in grave danger of stumbling into a direct confrontation with Iran thanks to Israeli pressure and the Washington neocons.”

Noting that Bolton and US Secretary of State Mike Pompeo are now clearly pushing for war, Lazare said that “even if they don’t launch a direct attack, they could also too easily stumble into some sort of conflict. If so, I don’t see anybody who is in a position to stop them. The situation has never been more dangerous.” – Sputnik News