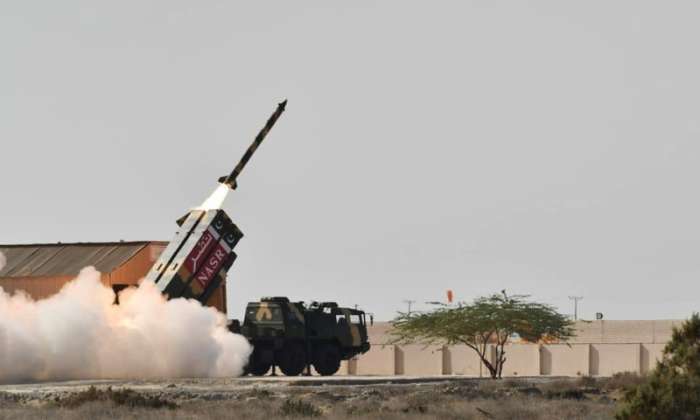 Pakistan launched a short-range ballistic missile Thursday, formally equipping the military with a nuclear-capable rocket that officials say would deter a surprise conventional attack against the country by rival India. “This training exercise involved launching of quad salvo for desired effects. NASR is a high-precision, shoot-and-scoot weapon system with the ability of in-flight maneuverability,” the military announced in a statement. Experts explained the weapon system’s ability to launch several missiles at once would allow Pakistan’s military to hit many targets at the same time.

U.S. concerned
The development of Pakistani tactical battlefield nuclear weapons has been a source of concern to the United States because their smaller size and quick deployment increases the risk of a nuclear conflict with India, say non-proliferation experts.

The Pakistani military noted in its statement the weapon system has augmented “credible deterrence” against the “prevailing and evolving threat spectrum, more effectively including enemy’s ballistic missile defense and other air defense systems.”

Pakistan and India have fought three wars since gaining independence from Britain in 1947. The two countries have since equipped their armies with nuclear weapons, raising fears that another conventional conflict could escalate into a nuclear exchange.

The territorial dispute over Kashmir, which has sparked two wars, continues to strain bilateral ties and prevents India and Pakistan from resuming long-stalled political talks. Intermittent military clashes across the de facto Kashmir border also have become routine, causing dozens of casualties on both sides. – Voice of America