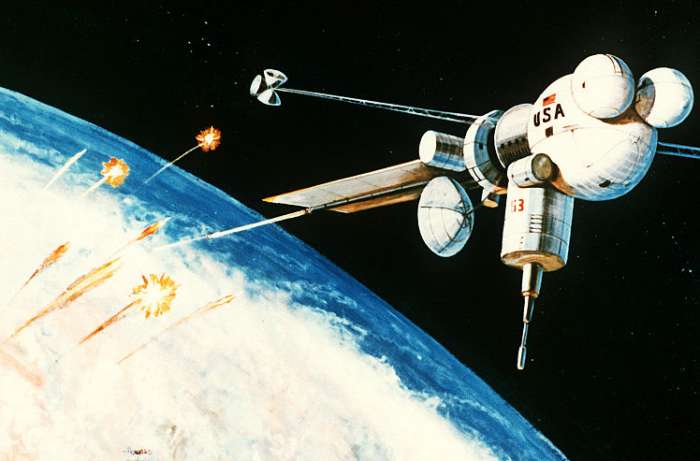 The US armed forces must utilize the framework of their new Space Command, announced earlier this year by President Donald Trump to go on the offensive to maintain military supremacy in the heavens, Secretary of Defense James Mattis said at the US Institute of Peace (USIP). “We have got to be prepared to go on the offensive in space,” Mattis said on Tuesday. “No competitive sport in the world can just play defense and win.” The US military would have to launch a new generation of satellites that could defend themselves, be more resilient and be quickly replaced, the defense secretary added.

A bundle of three Soviet RSD-10 missiles prepared for demolition at the Kapustin Yar launch site. The missiles were destroyed in accordance with the INF Treaty.

The US defense budget for Fiscal Year 2019 includes the re-establishment of the US Space Command. Earlier in October, Trump said the United States was creating a space force to catch up with China and Russia.

In September, Moscow warned Washington against deploying conventional arms in space, saying that the international community had to adopt an agreement on the issue.

The US military is exploring symmetric and asymmetric alternatives to follow up on President Donald Trump’s decision to withdraw from the Intermediate-Range Nuclear Forces (INF) Treaty, Defense Secretary also said.

“We are doing everything we can to find an option,” Mattis said on Tuesday. “There are options both symmetric and asymmetric.”

Mattis said Trump will take counsel from the Defense Department about this “grave” decision to leave the INF.

Earlier this week, Mattis said that the Trump administration was currently in talks with its NATO partners over Washington’s decision to withdraw from the INF Treaty. During his visit to Prague on Sunday, Mattis met with Czech Prime Minister Andrej Babis, who labeled the planned cancellation of the INF Treaty “bad news” and urged better communication with Russia.

On October 20, US President Donald Trump announced that the United States would withdraw from the INF, claiming that Moscow was not respecting the agreement.

The Kremlin has rejected US accusations of violating the pact and warned that Moscow would take measures to protect Russian security interests. On Sunday, Russian Foreign Minister Sergey Lavrov said Washington submitted a list of complaints regarding the implementation of the treaty and that Moscow was preparing a response. – Sputnik News