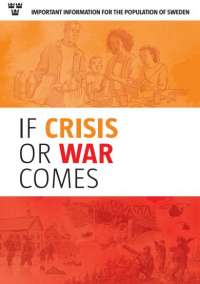 For the first time in nearly three decades, Swedish authorities have issued a new civil defense brochure that calls on citizens to prepare for national emergencies by making sure they have adequate food, water, shelter…and access to reliable information. Though it doesn’t identify any potential adversaries by name, the strong emphasis on the potential for dangerous disinformation during a crisis is almost certainly driven by Russia’s continued overt and covert weaponization of traditional and new media and other information warfare campaigns. The Swedish Civil Contingencies Agency, an element of the country’s Ministry of Defense, put together the new 20 page-long brochure, titled “If Crisis or War Comes+ (download here) – The Drive