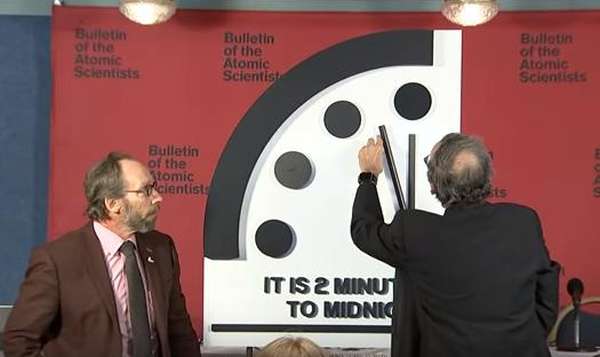 The Bulletin of the Atomic Scientists moved the doomsday clock closer to midnight on Thursday morning, warning the world that it is as close to catastrophe in 2018 as it has ever been. Scientists cited growing nuclear threats, climate change and a lack of trust in political institutions as they set the doomsday clock at two minutes to midnight — 30 seconds closer than it was last year.

“The world is not only more dangerous now than it was a year ago; it is as threatening as it has been since World War II,” Lawrence Krauss and Robert Rosner of the Bulletin of the Atomic Scientists wrote in a Washington Post column on Thursday, referencing President Trump’s repeated threats of war against North Korean leader Kim Jong Un, as well as his reversal of the Obama Administration’s efforts to stop climate change. – Time

“Major nuclear actors are on the cusp of a new arms race, one that will be very expensive
and will increase the likelihood of accidents and misperceptions. Across the globe, nuclear
weapons are poised to become more rather than less usable because of nations’ investments in
their nuclear arsenals” says Rachel Bronson, president & CEO of the Bulletin of the Atomic Scientists.”This is a concern that the Bulletin has been highlighting for some time, but momentum toward this new reality is increasing.”

The failure of world leaders to address the largest threats to humanity’s future is lamentable—but that failure can be reversed. It is two minutes to midnight, but the Doomsday Clock has ticked away from midnight in the past, and during the next year, the world can again move it further from apocalypse. The warning the Science and Security Board now sends is clear, the danger obvious and imminent. The opportunity to reduce the danger is equally clear. The world has seen the threat posed by the misuse of information technology and witnessed the vulnerability of democracies to disinformation. But there is a flip side to the abuse of social media. Leaders react when citizens insist they do so, and citizens around the world can use the power of the internet to improve the long-term prospects of their children and grandchildren. They can insist on facts, and discount nonsense. They can demand action to reduce the existential threat of nuclear war and unchecked climate change. They can seize the opportunity to make a safer and saner world. See the full statement from the Science and Security Board on the 2018 time of the Doomsday Clock.